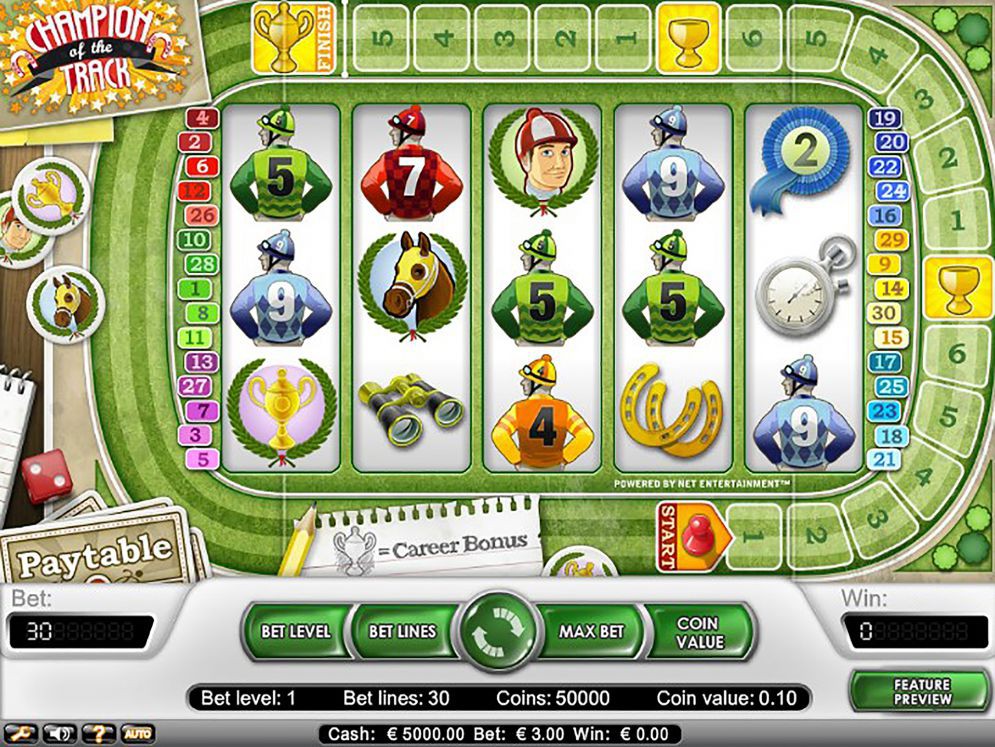 Unique atmosphere of the racetrack. Review of the slot machine Champion of the Track

No other sport has had such an impact on the development of bookmaking and gambling as horse racing. The first offices that accepted bets on the outcome of a sports competition were based precisely on the racetrack. At the same time, the bookmakers themselves needed more than luck - they had to know everything about horses and jockeys in order to make the right bet.

There has always been a very special atmosphere in the bookmaker's offices at the racetracks. Each bettor was rooting for his favorite and hoped that he would bring the maximum payout. This made the sport especially fascinating.

The atmosphere of such bookmakers is embodied in the Champion of the Track slot machine from the NetEnt developer studio. It differs not only with bright graphics and elaborate setting. The slot will also delight you with thematic bonuses and increased payouts.

And on our site you can play for free the Champion of the Track slot machine. This demo version is as much fun as the slots installed in online casinos. Only the game is for fans, but real money, and therefore it is completely free.

Championship at the racetrack

The playing field of the unusual slot machine Champion of the Track consists of 5 reels with 3 rows each. It is crossed by 30 prize lines. This number is fixed and does not change. Prize lines are calculated as usual - from left to right, starting from the first reel.

The number of basic symbols is quite standard for machines with a 5x3 field and is 8 pieces. The set includes binoculars, a stopwatch, horseshoes, a commemorative sign, and four jockeys - yellow, green, red and blue. Several special symbols also appear on the reels:

Before starting the bonus game, you need to choose one of the four jockeys. In this case, a guaranteed payment is already charged. Then the races begin. If the jockey comes to the finish line first, this payment will quadruple. For the second place the multiplier is x3, for the third - x2. The payout for the fourth place does not increase.

Around the field there is a track along which the figure moves. She takes each step after activating any feature of the slot machine: starting a bonus game, free spins, getting a big prize, and so on. As soon as she reaches the scatter with the cup, an instant payout occurs.

Write a Review for Champion of the track