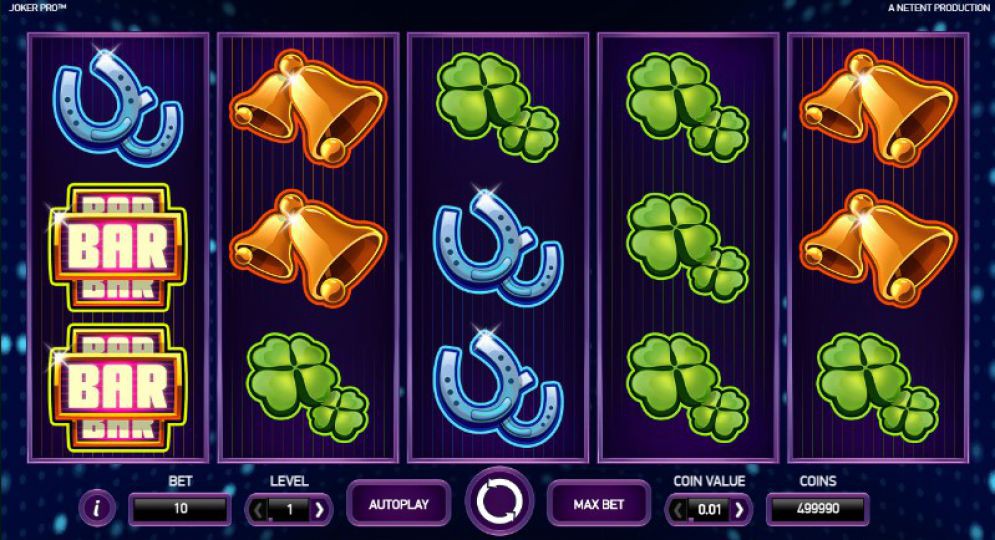 TOP online casino where you can play the Joker Pro

The classic game mechanics of slots - a 5x3 field, a relatively small number of prize lines, clear rules - remain in demand even in the 21st century. Because why reinvent the wheel, deliberately complicating the gameplay for the sake of ghostly bonuses that may or may not come?

Even the developer studio NetEnt understands this, which "ate the dog" on modern slot machines. Therefore, the Joker Pro slot is based on classic mechanics. It even manifests itself in the design, which is quite traditional and understandable. However, the slot machine has an "ace up its sleeve" that can surprise even experienced players - the "Joker Pro" mode. But about him - below.

In the meantime, you can try this unusual mode yourself. Moreover, on our site you can play for free the Joker Pro slot machine, and this demo version is as functional as those installed in an online casino. Only the spins are conducted not for real money, but for the local currency - "credits" or "coins".

The design of the Joker Pro slot machine is traditional, but thanks to the bright It looks very futuristic to the "neon" shades and high-resolution graphics. The slot is greeted by a field consisting of 5 reels with 3 rows each. It is crossed by 10 prize lines, which are calculated, as usual, from left to right. This number is fixed and does not change.

The set of basic symbols is relatively small. It includes a four-leaf clover, a horseshoe (for some reason, blue), bells, a Bar sign, sevens and crystals. There is only one special symbol in standard spins - this is a scatter made in the form of a jester's cap.

The scatter drops out exclusively on the central reels - 2, 3 and 4. If it appears on all three at the same time, a special "Joker Pro re-spin" will start.

During this re-spin, reels 1 and 5 turn into wilds, and symbols are thrown only on the center three. This somewhat increases both the chance of winning and the payout. In addition, during a re-spin, a special wild symbol is added to the reels (it looks like just the inscription Wild), and it can replace any base one to create a winning combination on the payline.

Wilds drop out when re-spinning only on the central reels. If the center line consists entirely of them, a Hot Spot Win jackpot will be awarded, which is 1000x the stake. In addition, each wild symbol will award an additional re-spin.

Write a Review for Joker Pro