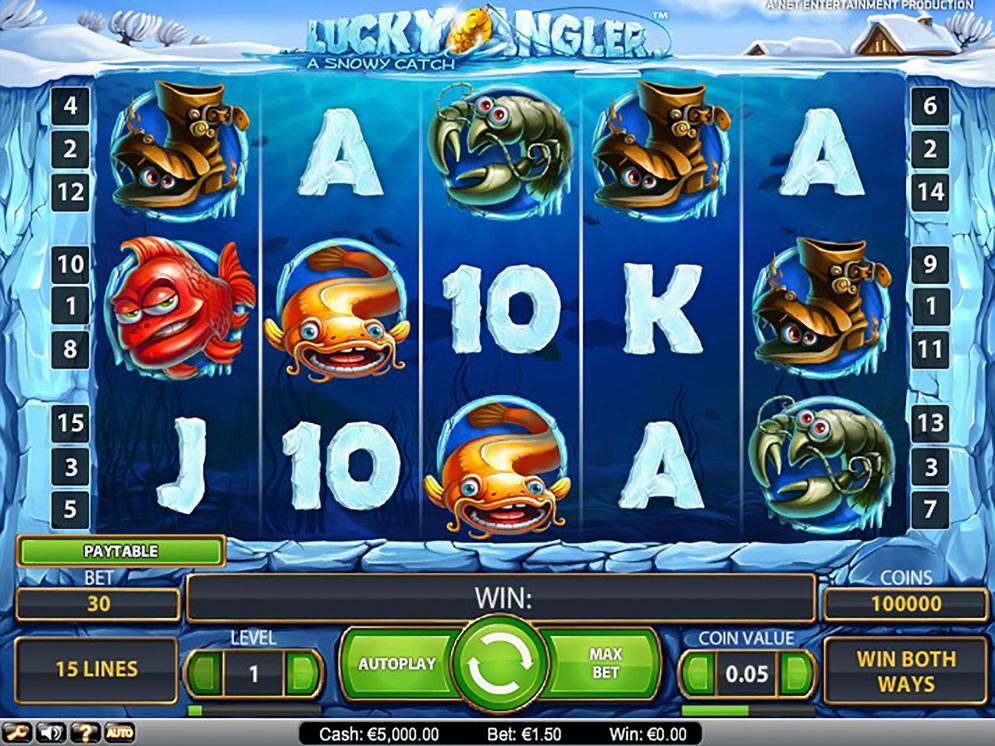 TOP online casino where you can play the Lucky Angler

The online slot machine leaves only positive emotions. Its peculiarity is that it can bring free spins of the reels quite often. But, nevertheless, it is better to first test the online slot machine Lucky Angler in free mode, after that, if everything suits you, switch to playing for money. At the same time, it is best to play at small rates. The slot is also distinguished by a high variance with an average cycle length, and although the 96.4 theoretical return on bets does not allow you to get a positive mathematical expectation of a win in an online casino, the machine brings more or less tolerable profit without any problems.

Back in 2012, the gambling software company Net Entertainment presented to its fans and gamblers a new slot machine with five reels Lucky Angler, which also had three rows in each reel, fifteen active paylines and an option with free spins, with all the winnings are counted from right to left and left to right, it is also important that in addition to standard special symbols, the game also has Sticky wild. NetEnt said that the online slot Lucky Angler can return the bets made in the form of winnings in 96.4% of cases, and the maximum winning is 205,500 coins per reel revolution.

Description of the slot machine and appearance

What do you associate with fishing? Surely, with warm summer weather, a blue river stretching into the distance in a long ribbon, a picnic in nature. If so, then you have definitely never been on ice fishing and you definitely do not know that very feeling, when it is simply vital to dress as warmly as possible and go to a snow-covered, icy body of water and make holes to sit with a winter fishing rod. Of course, if you live in a big city, it is difficult not only to imagine this, but also to implement it, since it is quite difficult to get out of the city and find a place that has not yet been touched by a person. Therefore, the developers of Net Entertainment decided to help those who faced such a problem, and developed a online slot machine Lucky Angler for all ice fishing lovers. By launching this colorful, bright and interesting video slot, you will definitely return home with a big catch in the form of large payouts. One has only to wait for the loading of the main screen and now you are in the middle of the river, covered with a thick layer of ice.

Before us appears a very entertaining, even picturesque picture of snowdrifts, a bright winter sun, because of which tree branches literally sparkle, and somewhere far away you can see the wooden huts of a small village. This design was chosen by the developers for the Lucky Angler slot machine, winter tranquility and, undoubtedly, excitement and adrenaline, because even after a few spins, the slot will surely bring a good mood. Even the soundtrack is designed to reassure the player, it is no secret to anyone that the noise of the water has a calming effect, and in our case it should also attract attention.

But the sound design consists not only of the sound of water, but also special sound effects that accompany various events in the game, such as the launch of the reels and their rotation. In their sound, they most of all resemble the sounds of baited tackle falling into the water, which are painfully familiar to every avid player. But as soon as a winning combination appears on the field, the calm music is replaced by loud fanfare. The river was chosen as the game screen, or rather the water in it is blue, in which you can see both green algae and silhouettes of fish scurrying back and forth. If you look closely, you can clearly see that all the elements in the game are perfectly drawn, and some also have animation effects. The developers of Net Entertainment will even help you go winter fishing without leaving your home, you just need to visit an online casino and launch a online slot machine Lucky Angler .

Well, here we are on the ice, now you can safely drill holes and set nets or throw a fishing rod, whoever likes it, and prepares for a big catch. Online slot machine Lucky Angler is 5 reels and 15 paylines at once, the number of which cannot be changed.

So, to make the reels start spinning, press the big round button in the middle of the panel. Next to it is the max bet button, with its help the player can start the reels immediately at the maximum bets. The second button located next to it is auto play, it is needed to start the reels in automatic mode. This mode is good because you can not be distracted by the game and go about your business while the reels rotate according to the previously set parameters. Then you need to place a bet, this is the most important thing in the game. First of all, we determine how many coins will be debited from one line, for this use the level key, the cost of one line will be from 1 to 10 coins. In addition, the player can always set the rate of the game currency, at will, the cost of one credit in the game ranges from 1 cent to 1 dollar. To look at the tables at any time during the game and familiarize yourself with the main opportunities for winning, press the "I" button.

To win even more, the developers have provided special symbols such as wild and scatter, and there is also a free games mode in the game, as well as another special Sticky wild symbol. Unfortunately, there is no possibility of increasing the winnings in the risk game, and there is no progressive jackpot, there is no bonus game either.

The paytable is for this purpose, so that the players get acquainted with those forest dwellers who, sooner or later, will become your catch.

Playing cards were chosen as the junior category of symbols, they are frozen in pieces of ice, as always, these are symbols from ten to ace. Their multiplier is in the range of five to two hundred coins. Even if this is not so much, it will undoubtedly warm the fisherman in any cold.

Remember the proverb that there is fish for fishlessness and cancer? Here this proverb found its confirmation. A picture with a crab and an old boot can top up a player's account up to 750 coins. And the largest payments can be received for symbols with a blue perch, golden catfish, red fish, they will be very unhappy that they were caught, but they will replenish their wallet with up to 2000 coins per line.

It is difficult to imagine any video slot without special symbols, of course, online slot machine Lucky Angler is also among them. A goldfish on a hook is a wild symbol that can be a Sticky wild at the same time, i.e. sticky or frozen. When the regular game is active, this symbol appears only on the second and fourth reels, and when the series of free spins is active, it also appears on the third. But in order to get the maximum catch in your nets, you need to catch scatter symbols on the playing field, by the way, this is a picture with a school of fish.

To start free spins, you need to collect three or more scatter symbols anywhere on the playing field of the Lucky Angler slot. In total, you can get from 15 to 20 free spins. Free games are launched with the same parameters as they were in effect at the time of the appearance of a set of scatters. In free spins mode, the wild symbol becomes Sticky wild and freezes in place when it spawns. The wild symbol will appear on the three reels in the center, except for the left and right reels. In theory, it is possible that all three reels are filled with wild symbols, which means that the winning will be the maximum.

As a rule, wild symbols can replace any other symbol in the game, with the exception of the scatter symbol. Sticky wild can appear on three reels, and the usual one only on the second and fourth, on the third reel it is activated only in the free spins mode. At the same time, when the wild symbol hits the third reel, it remains there until the end of the free spins. If you have a frozen wild on the playing field and you want to change the bet parameters, they will not change until the spin brings winning combinations with their participation.

Write a Review for Lucky Angler