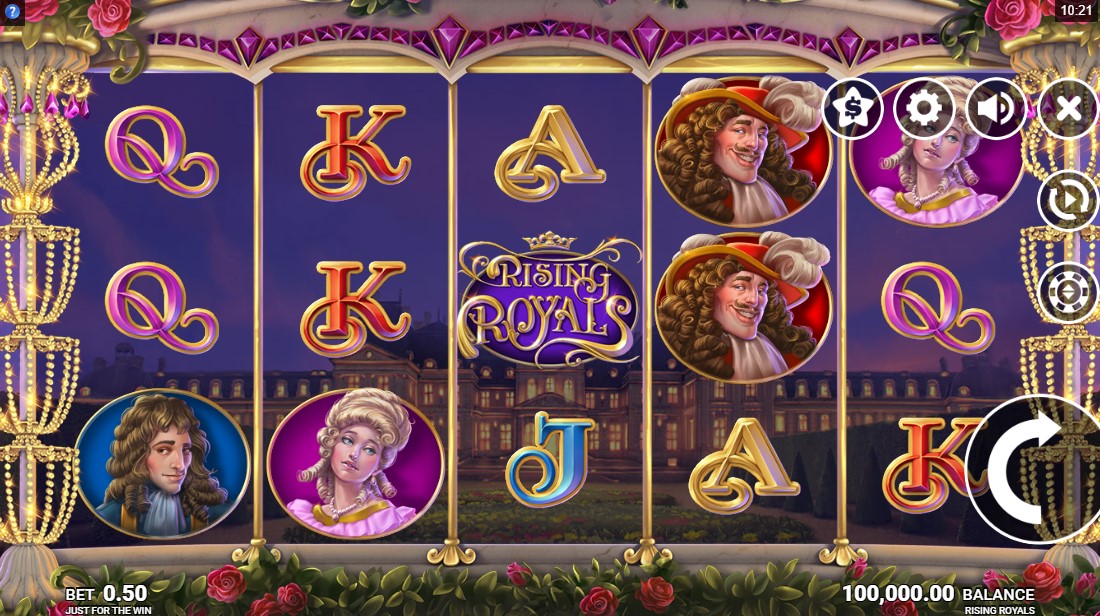 TOP online casino where you can play the Rising Royals

Rising Royals is a royal themed slot developed by Just For The Win and Microgaming.

Opening the Rising Royals slot machine you will find yourself in France in the 18th century, because it was then that complex hairstyles and huge ball gowns were in fashion. The developers of Just For The Win invite you to immerse yourself in this interesting atmosphere and play the Rising Royals slot and who knows, maybe the king and queen will reward you with truly royal winnings.

As soon as you open the Rising Royals slot, you will immediately notice its insane resemblance to Tiki Vikings, the same developer who came out 2 months ago. This is really so, because if you have played in, it becomes clear that the Rising Royals slot is made according to an identical template and differs only in the theme. And if there were Vikings in Hawaii in the slot, then in Rising Royals we will most likely get to the Palace of Versailles, which became the backdrop for this slot machine. This palace is perfectly visible through a transparent playing field surrounded by huge vases of precious stones. From a technical standpoint, the Rising Royals uses five reels and 20 lines to form your winnings, just like it does. The symbolism of the Rising Royal slot is fully consistent with the chosen theme, so on the reels you will see beautifully drawn card names from J to A, as well as three members of the royal family. The most profitable symbol in the Rising Royals slot is the game logo on a purple background, for combinations of five such symbols on a payline, you will receive a win 15 times your stake. But you will not see special wild and scatter symbols in this slot machine.

As you already understood, since the slot does not have a scatter symbol, it means that there are no free spins in it either. But despite this, it is quite interesting to play due to two features called Symbol Lock Re-Spin and Symbol Upgrade, which are related to each other.

In order to see these features in action, you need to get a winning combination with any symbol, except for card names. After that, you will see how the winning symbols are fixed in place, and you get a re-rotation of the rest of the images. If the necessary symbols appear on the playing field, they will also join the winning ones and remain in their positions. Repeated spins will continue until the desired symbols appear on the game reels.

Symbol Upgrade - This feature is directly related to the previous one. Each time the desired symbol is added and fixed on the playing field during the re-rotation, you will see how the chandeliers located on the sides light up. As soon as the three chandeliers on both sides light up, you will see the locked symbols update to the next highest value, as long as possible.

Summing up, I would like to say that Rising Royals is an absolute copy of the slot, but with a different theme and set of symbols. The Rising Royals slot has quality graphics, but very low winnings and simple features. In order to decide whether this slot is worth your attention, try to play the demo version on our website. 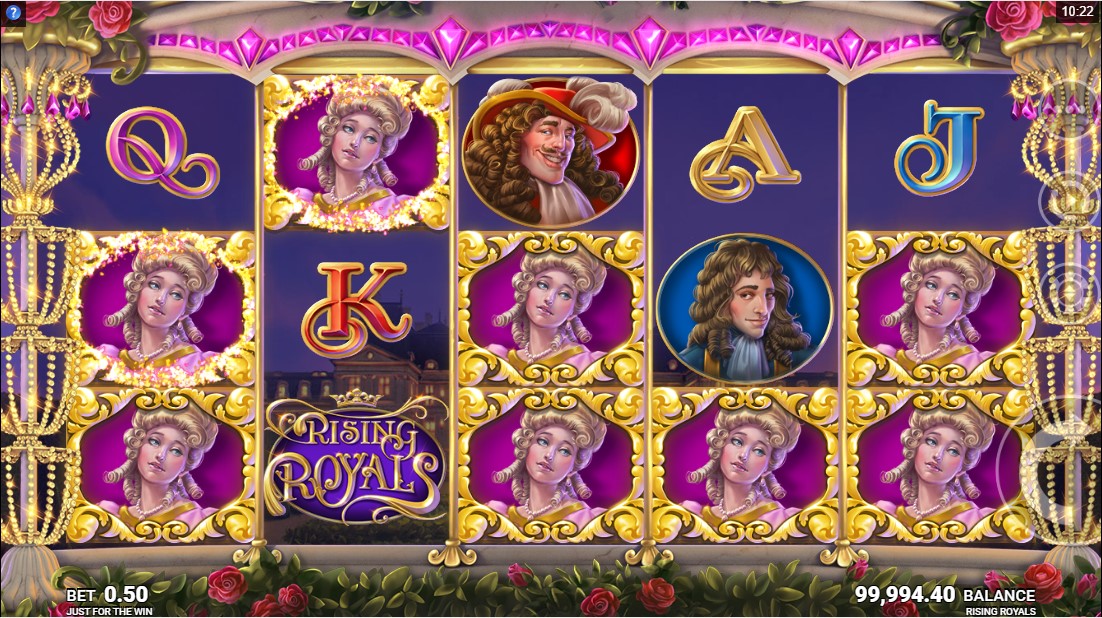 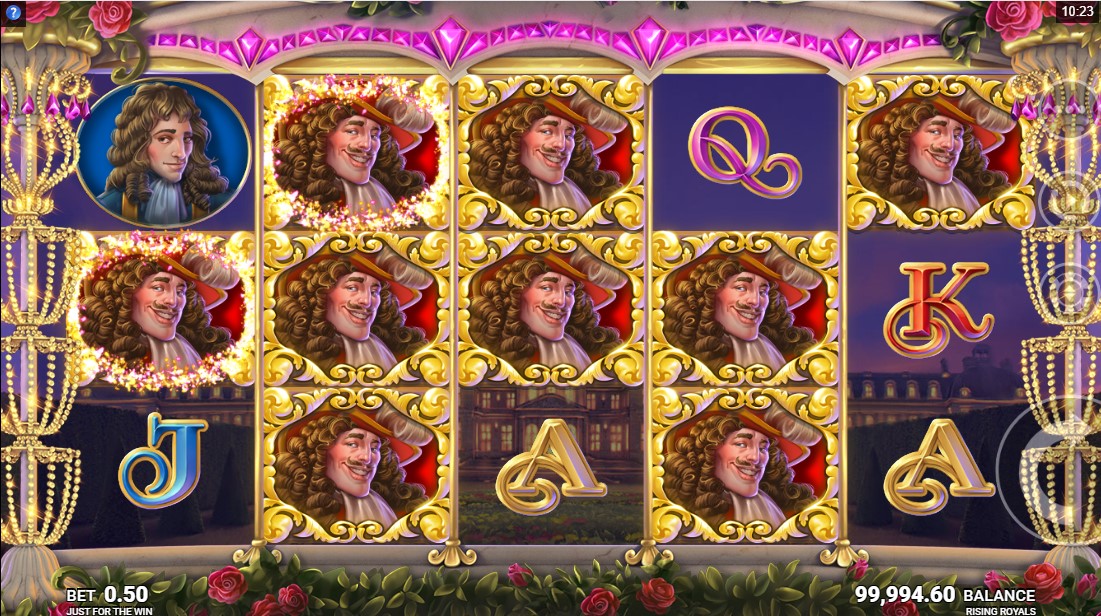 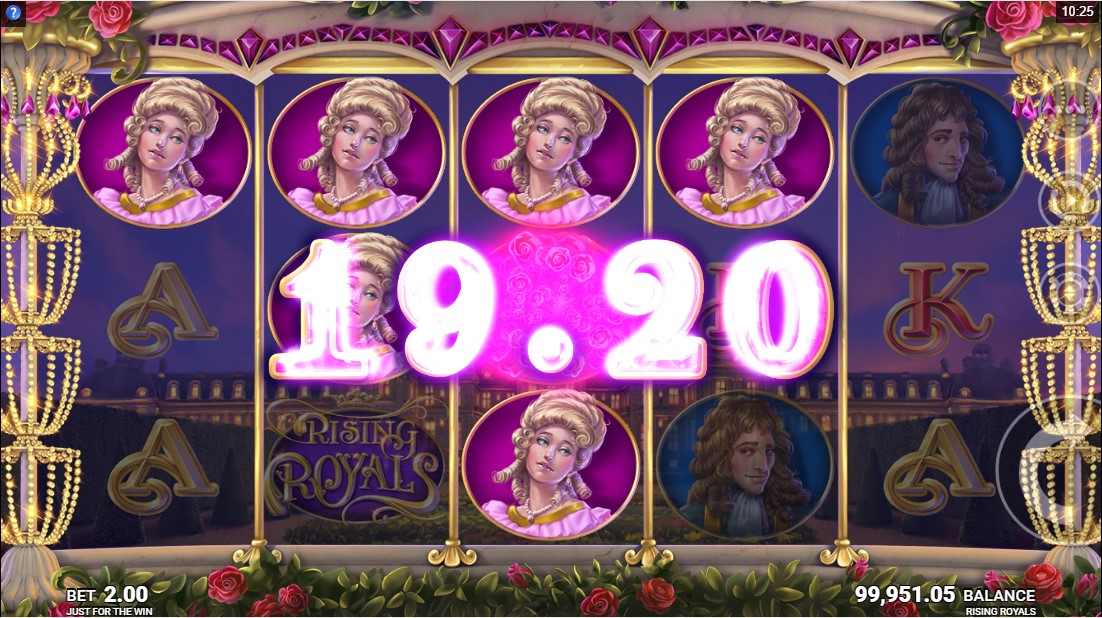 Write a Review for Rising Royals