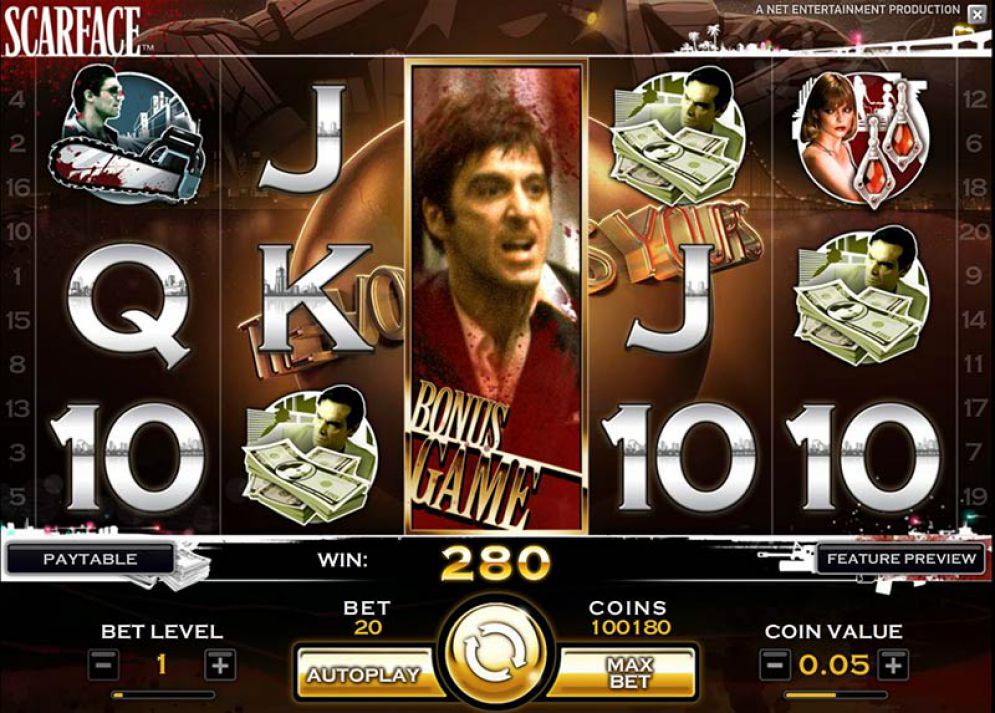 TOP online casino where you can play the Scarface

The online slot machine ScarFace will be very interesting, first of all, to fans of the feature film of the same name. However, the fun gameplay will appeal to many players, not necessarily movie fans. Fascinating graphics of the slot, made using real frames from the film, and the gameplay itself repeats the storyline of the film. The developers tried to attract as many players as possible, so the high quality of performance is a matter of course for NetEnt. What is more interesting is that they have endowed the machine with their own zest in terms of technical characteristics, the main of which is the options with wild symbols, which certainly bring good payouts. I must say that the online slot machine ScarFace has not been created for the possibility of big wins, but rather it was created for a pleasant pastime in the evening, nothing more. It does not have the potential for large bets to pay off, here both the cycle is average and the variance is also at the average level. The slot is not bad, but clearly does not hold up to the title of excellent.

It is a well-known fact that the popular Swedish company NetEntertainment cooperates with well-known film companies. One of them is Universal and the fruits of their joint creation are already known to NetEnt fans. Moreover, the gaming software created in partnership between the two companies gave the most unexpected results, sometimes the creators themselves did not expect such popularity of video slots. One of such creations is online slot machine ScarFace , created, as you might have guessed, based on the eponymous blockbuster Scarface, which has won numerous awards and accolades from film critics. This video slot has become an example of effective cooperation between a gaming software manufacturer and a film company. Layers are configured to return the bets made not less than 96.8%, and the maximum winnings per spin is not that big, only 60,000 coins.

Almost any emulator from NetEnt starts with an introductory video clip. In the case of ScarFace, this is some footage taken from the original film. After the video ends, a playing field appears in front of the player, made mainly in dark colors, with a brown color. The background color will change to bluish when the free spins start. Right behind the drums, against the background, you can see a globe with the inscription "The World is Yours", which became known precisely when the movie Scarface began to be released in cinemas around the world. As for the graphic design, in this regard, the developers adhere to their main duty, namely high quality workmanship, so fans have something to be surprised at. Here you will find symbols with the expansion function, and changing shades of the main background, bloody splashes, and a certain sound of each event of the gameplay. Both the musical accompaniment and the graphic design are made competently and resemble some events in the plot of the movie of the same name.

We must pay tribute to the developers, they try not to complicate in any way, let alone change the slot management. This is certainly a plus, because you don't have to re-study the control panel, since it is basically the same on all NetEnt machines.

So, here is a slot machine with five reels and 20 paylines, which are initially always active. The device is started using the central round button in the center of the panel. There are two more large buttons next to it. The first is max bet, which allows you to start the reels immediately with the maximum bets. The second is auto play, designed to start the automatic mode, i.e. the reels will spin independently, you just need to select the required number of automatic spins.

The size of the bet is also regulated by the player. To place a bet, click bet level, at least one and maximum 10 coins can be placed on one line. You can also choose the appropriate rate of the game currency, which varies from one to fifty cents. On the bottom panel, in the left corner, you can adjust the sound and graphic settings.

There are no many special symbols in the game, in fact, there is only a wild symbol. There is no progressive jackpot in the ScarFace slot machine, but there is a bonus game and free reel spins.

As the cheapest, NetEnt developers have chosen the standard option, namely card symbols, for which the winnings from 10 to 150 bets are provided. Portraits of the main characters of the film are used as thematic symbols; by the way, they have a wide range of payments, ranging from 20 credits to 2000.

The highlight of the video slot is a special wild symbol option called Stacked wild, this symbol can appear in three different forms.

Symbol with a portrait of Elvira Hancock. If it appears on the fourth reel, the player gets 15 free spins of the reels with a multiplier of x3.

The symbol with Manolo Riber will appear only on the third reel, and he will also launch the option to shift all symbols with subsequent rotation.

The Tony Montanu symbol will appear only on the second reel, it starts the bonus round after it fills the entire reel.

All these options are launched only if at least three symbols appear on the playing field. If there is one or two, then they will perform the usual functions of wild symbols, i.e. make winning combinations by replacing the missing symbol.

To start the bonus game, you need to fill the entire second reel with the wild symbol, this option is called Nudge Spins. The bottom line is that the player gets two free spins, during which wild symbols will move down one square for each spin.

The falling out of one of the characters on the third reel in the amount of three starts a bonus round. This game repeats the plot of the final part of the film. The player will take part in a real chase and shoot back from pursuers from firearms, as well as throw grenades at them. The more you eliminate opponents, the more you win.

Having won the fourth reel with wild symbols, the player gets 15 free spins with a multiplier of x3.

Write a Review for Scarface