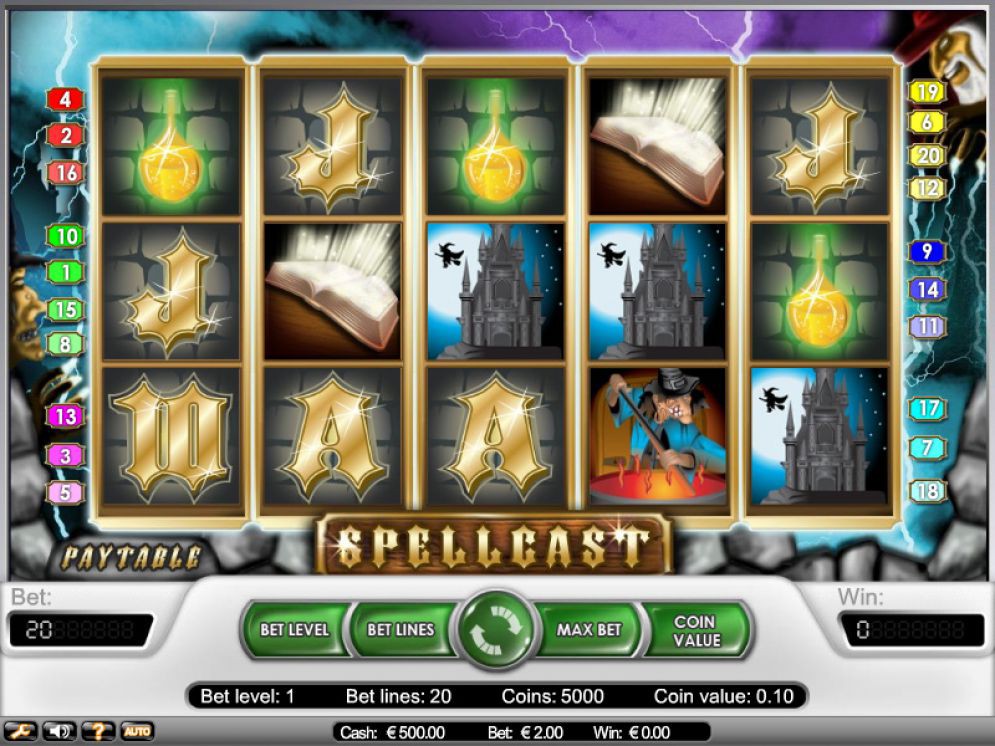 TOP online casino where you can play the Spellcast

To be honest, the Spellcast online slot is not particularly remarkable, and as many testers correctly noted, play on Spellcast for real money, this is a real risk, not always justified. A theoretical return of 96.8% does not allow getting a positive mathematical expectation of a win in a casino, moreover, it has an average cycle and a high variance. You can even argue about the variance, because no one saw it. The gameplay is not impressive at all, and indeed everything is below average. It is recommended to try the Spellcast Slot Machine in free mode and forget. Unless you're a fan of franchises like Harry Potter or Merlin, of course. Only in this case it will be interesting for you, because the atmosphere of the slot really attracts with its mystery and magic. We recommend playing Spellcast only in trusted online casinos:

At all times, mankind has been looking for answers that will reveal the secrets of magic and sorcery, so that this can know what an ordinary person cannot do. Even the most severe skeptics, categorically denying any magical powers, and they are not averse to at least once in their lives, literally with one eye to see what awaits in the future. And some would like to learn a few magic spells in order to try them and catch Lady Luck.

Well, all this became possible, first of all, for the fans of the creativity of the developers of the NetEntertainment company, because they were the ones who became interested in the topic of magic and enchantments, ultimately creating a Spellcast online slot machine or, if translated, this is a slot machine Spell. All you need to do is go to any online casino partner NetEnt and launch the Spellcast slot machine , then relying on luck and saying a couple of spells, start playing, and of course winning. In addition, this is quite realistic, theoretically, the slot is configured to return the bets made not less than 96.8%, and the maximum winnings that a player can get is 400,000 coins per spin.

The Spellcast online slot will meet the players with its mysterious and enigmatic atmosphere. There are animation effects of bright flashes of lightning against the background of a dark sky, purple or blue, behind you can see an ancient castle in which bats are found. The playing field is made of a frame with gray stones and warlocks. As always, there were animation effects of symbols, the appearance of which is necessarily accompanied by disturbing and mysterious sounds of musical accompaniment. Especially distinguished was the ominous laugh, which makes the atmosphere seem even frightening. But scaring the fans of NetEnt is a useless task, they now have their own spell for all occasions, so that they are not afraid of any troubles, and luck always goes by.

In fact, the art of magic is much simpler than we imagine and it is not at all necessary to study ancient scripts for years in order to comprehend all the mysteries of spells. In our case, it is enough to study the control panel to gain the necessary knowledge.

Before you is a completely ordinary and even standard slot machine. It has 5 reels and 20 paylines. The number of active lines can be changed by the player at any time convenient for him between spins, for this there is a bet lines button. On each of the selected lines, you can bet from one to four coins, this is done using the bet level button. Bets also have a rate, to select the nominal value of one credit in the game, use the coin value button. The game currency rate varies from two to fifty cents.

For those who want to take a big risk, there is a max bet button, by pressing which the player activates the largest bet in the game and the reels will immediately start at this bet. If during the game you are not going to change the parameters of bets and the number of lines, then pay attention to the autoplay button, with which you can start the reels in automatic mode, you just need to select the required number of spins. You can always find out the details about the rules, see the paytable tables and some technical characteristics using the help window, which will open after clicking the paytable button.

Sound as well as graphic settings can be found in the lower left corner of the game screen. The Spellcast online slot machine will not delight fans of games for doubling winnings, progressive jackpot and other bonuses. Instead, it has free spins on the reels as well as special symbols like wild and scatter.

As always, the developers of NetEnt have chosen playing cards as the junior category of symbols, but, nevertheless, they are also gold here. It is also interesting that in this category the most inexpensive symbol is nine, and not ten, as is usually the case. All these symbols from nine to ace will bring players a minimum of two bets and a maximum of 200, depending on the number of dropped symbols and their seniority in the deck.

Also, at least two bets, but already 750 maximum can bring thematic symbols, which are also paid, depending on the number of dropped symbols, much more expensive. These symbols are a Magic Wand, a book of spells, a jar of liquid, an image of a sorcerer who is cooking something in a cauldron, and an ancient castle.

As a wild symbol, the developers chose a picture with a sorcerer in a large hat with wide brims, who also laughs ominously from time to time. It should be noted that the sorcerer is quite strong, because with a wave of his magic wand he will not only easily replace any other missing symbol in a winning combination, except for the scatter symbol, but will also double the winning combination with his participation.

As you know, a magic ball is an integral attribute of any sorcerer, in fact, it is chosen as a scatter symbol. When at least three such symbols appear on the playing field, it will start free spins of the reels in the amount of 15 pieces, all winnings will be multiplied three times.

It's no secret that NetEntertainment generally doesn't please its fans with progressive jackpots, the Spellcast online slot machine doesn't have it either. But this is not at all a drawback of the slot, the fact is that it has other ways of making a good profit. For example, 5 wild symbols on one active line will immediately replenish the account with 10,000 bets. There is also no risk game or bonus round in the game, a full-fledged bonus game is different, it replaces a round with free spins. During free spins, the player not only receives a triple multiplier for each win, but also the opportunity to get additional spins if three or more scatter symbols appear on the playing field again.

For those who are not yet confident in their magical powers, you can try to play the Spellcast slot for free and without registration, thus you can get to know the video slot better, as well as test your magical abilities in practice. In addition, the free mode will allow you to gain experience, find out the mood of the device and develop your own game strategy.

Write a Review for Spellcast