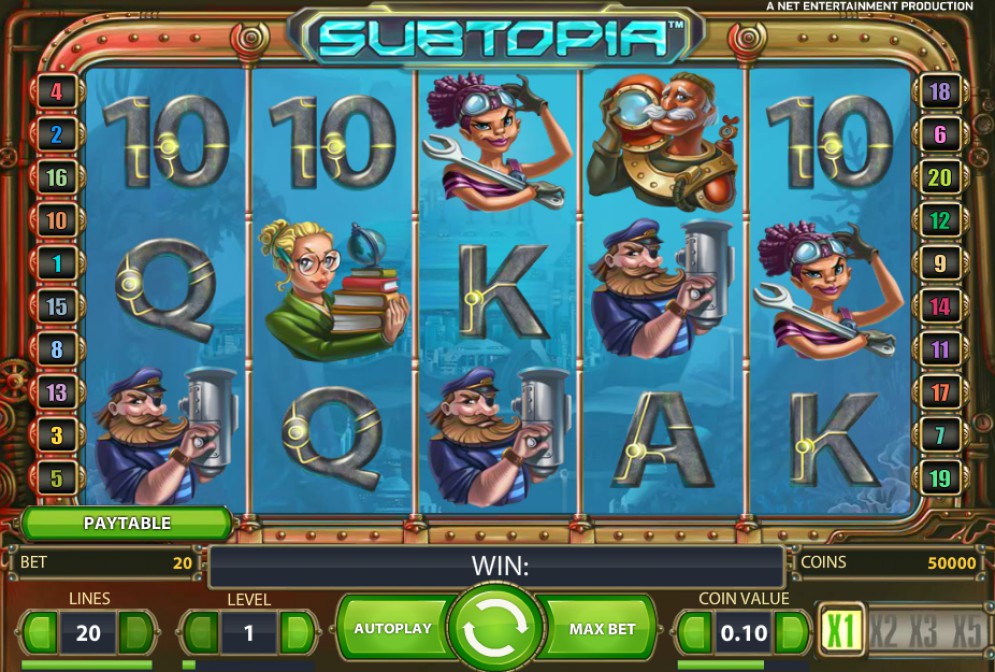 TOP online casino where you can play the Subtopia

The fact that the Subtopia online slot machine is made at a very high level, this applies to graphics, music, and gameplay, it is clear right away, because the development was carried out by the specialists of NetEntertainment. The most important feature of this slot is its multiplier counters, the most interesting is that they are used not only in the free games mode, as is often the case, but also in the main game. Of course, this fact cannot but rejoice, even experienced and sophisticated gamers in gaming software will appreciate the good chances of a good win. The return percentage is 96.7%, this percentage is not the lowest, but it will not work to get a positive mathematical expectation of a win in a casino, especially with a long cycle and average variance. In general terms, this video slot does not differ in its technical characteristics from many similar emulators, everything is not an average level. As for the recommendations, then everything is standard here too. First try to play on the Subtopia slot for free and without registration , and then for real ones, in no case using large stakes, you can play quite successfully at medium stakes.

The hectic life of a big city sooner or later tires the inhabitants of the metropolis, so many of them find salvation by buying houses outside the city, and some approach this issue radically and completely move to the countryside. The developers of NetEnt decided to approach this problem from a completely different angle and created a online slot machine Subtopia , in which the main characters settled not outside the city, but generally at the bottom of the ocean in their own city. The slot machine can return 96.7% of the bets made, and the payout when playing at maximum bets will be a maximum of 120,000 coins.

Since the online slot machine Subtopia is devoted to the marine theme, the main color is quite predictable, these are blue shades. And judging by the design, players will be watching the city through the porthole of the bathyscaphe, as indicated by the brown framing of the playing field. The underwater city is already visible behind the reels, and its inhabitants are happy to welcome the players who have come to visit them. As for the soundtrack, it is also made at a high level and corresponds to the marine theme, since it is mainly the noise of the water.

Although all the characters of the slot are friendly to the players, descent to the very bottom of the ocean is still a risky undertaking. Therefore, in order to minimize the risk, it does not hurt at all how to study the control panel of the Subtopia slot machine.

Here is the most ordinary slot machine with five reels, on which there are 20 paylines. The number of active lines is chosen by the player, for this you need to use the bet lines button. As always, in order to start the reels, you must press the central round button with arrows. In fact, the control panel is very simple and even a beginner will not find it difficult to deal with it. To activate the maximum bet in one click, click the max bet button located next to the start button. There is also an auto play button, which is used to start automatic spins, you just need to select the required number of automatic spins and the reels will start spinning on their own, without your participation. One of the most important actions is the choice of the rate, for this, use the level key, with which you can adjust the number of coins on each line from a minimum of 1 coin to a maximum of 10. In addition, all NetEnt machines have a game currency rate to select the nominal value of one credit in the game, press the coin value button and select how much one coin will cost in the range from 1 to 50 cents.

The maximum bet in the game is 200 coins or, guided by the in-game course, it is 100 euros. The maximum payout does not exceed 120,000 coins, while the amount can be credited in one spin. Wild and scatter symbols will also help you in the game. There is no progressive jackpot here, just like there is no bonus game or game to double the win, but there is a series of free spins. During Free Spins there will be a special progressive multiplier option from minimum x2 to maximum x6.

The lowest paying symbols in the game are playing cards, although they are the most frequent guests on the reels of the underwater slot. They belong to the younger category of symbols and the least amount of coins is charged for them, from five to 150. Naturally, everything depends on the number of dropped symbols and their seniority.

There are also residents of the underwater city, or rather pictures with their images. So a girl, apparently a mechanic, a woman scientist with a globe, a diver wearing a spacesuit, as well as a captain and an archaeologist appearing on pay lines will not only express their friendliness, but also replenish your wallet. The minimum multiplier for them is 20, and the maximum is 2000.

Of course, the game was not without special symbols such as wild and scatter. A picture with a compass is used as a scatter symbol, it starts free spins of the reels with a progressive multiplier from two to six, according to the multiplier counter.

But the multiplier counter is not only in the free game, but also in the main game, it is located in the lower right corner. Depending on the roll, the counter can give a multiplier from two to five. This multiplier starts randomly.

A picture of a device emitting a blue glow is used as a wild symbol. It does not stand out in anything special and performs only its main function, namely, replacing other symbols and thereby building prize combinations.

As mentioned above, the Subtopia online slot machine will not be able to boast of such bonuses as an additional game or a progressive jackpot. To start free spins of the reels, you need to collect at least three scatter symbols on the playing field at the same time, anywhere. The most important feature of these Free Spins is the progressive jackpot, which will increase from two to six.

Write a Review for Subtopia