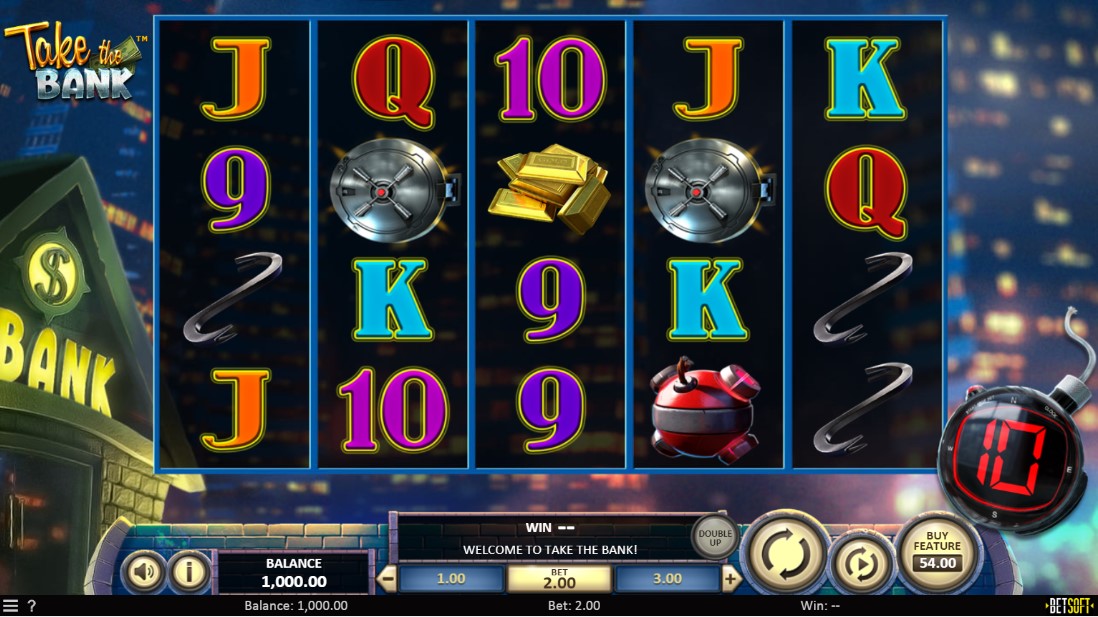 TOP online casino where you can play the Take the Bank

Meet Take the Bank is a robbery-themed slot game developed by Betsoft.

Surely each of you has watched a movie about bank robberies at least once in your life. Such plots are very interesting, because you never know what will happen in the end. If you approach the matter very thoroughly, then you can carry out your plan, but if everything is not thought out to the smallest detail, you can run into the police and it is unlikely that the loot will help in this case. Of course, we do not urge you to rob banks, but simply offer to play a slot machine developed by Betsoft called Take the Bank with a robbery theme, in order to find out whether the main character will cope with his goal.

From the point of view of design, the Take the Bank slot machine looks high-quality and interesting. Having opened the slot, you will find yourself on one of the city streets, because this is where the Betsoft developers have placed the game screen. Behind the playing field, you can see huge skyscrapers, and on the left side is the very bank that the main character is going to rob. As for the technical characteristics, the Take the Bank slot machine has five reels and 75 lines, on which your winnings will be formed. If you look at the paytable, it becomes clear that the developers have filled it with symbols characteristic of this topic. On the game reels, there will appear: lockpicks, bombs, safe doors, stacks of cash and gold bars - these symbols are of average value. You will also see symbols of low value in the form of card names from 10 to A. The most valuable symbol in the game is a huge diamond, apparently the robber came for it. By the way, about the robber - he plays the role of a wild symbol, which means he can replace all simple images in the game, also an interesting opportunity is associated with this symbol, we will talk about it below. A police car is a Bonus symbol that, when the required amount appears on the playing field, will start a round of free spins.

Let's take a look at some interesting features associated with the wild symbol. So, pay attention to the bomb with numbers located near the game panel. The initial number on it is always 10, but after each spin the numbers decrease by one from 10 to 0. While the bomb counts down, all wild symbols that appear on the playing field remain in their positions, turning into a bomb over time. As soon as the time is up, all the bombs explode and turn into wild inscriptions, replacing all images with the exception of the bonus one. Thus, you have a good opportunity to fill as many cells as possible with wild symbols in order to get good wins. This process will repeat every ten rotations.

Free Spins Feature - this is the most important feature in Take the Bank slot machine and it is related to the police car. After all, it rarely happens that the police do not interfere in a robbery. In order to gain access to this round, you need to catch bonus symbols on the second, third and fourth game reels. Once this happens, you will become a member of 15 free spins. During these spins, 5 to 7 wild bombs will be added to the reels, which will move around the field, exploding after each spin, helping you to form winning combinations.

If you don't want to wait for the required number of scatter symbols to activate free spins, you can buy them. To do this, click on the button labeled Buy Feature, after which you will see three options for free spins with a different number of wild bombs:

In conclusion, I would like to say that Take the Bank is definitely a high-quality slot machine with a popular theme, which will be an excellent addition to the Betsoft portfolio of games. 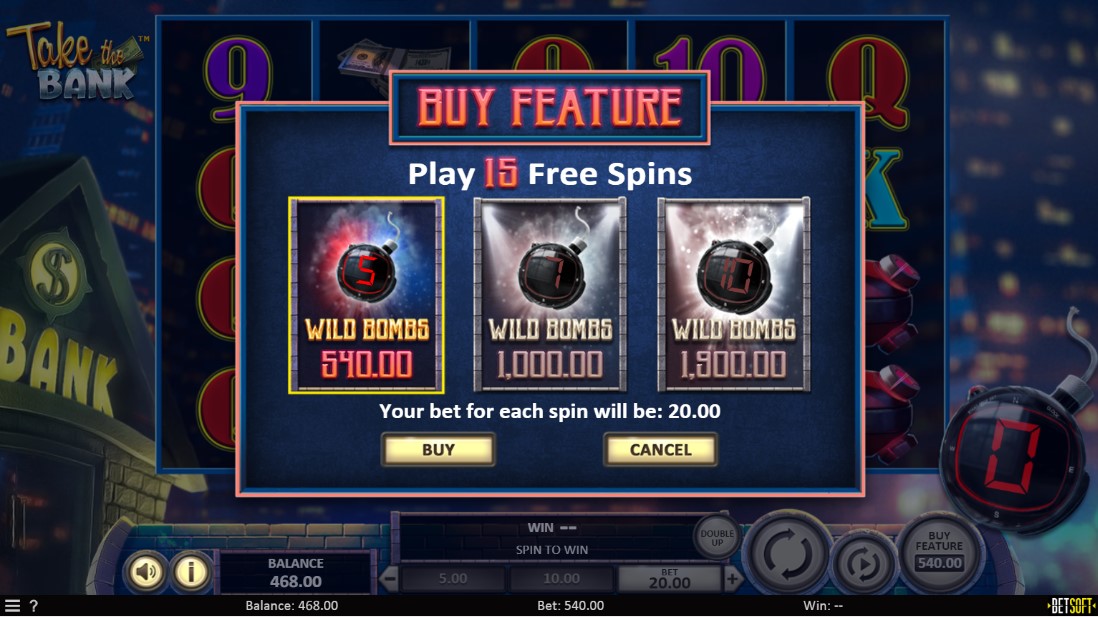 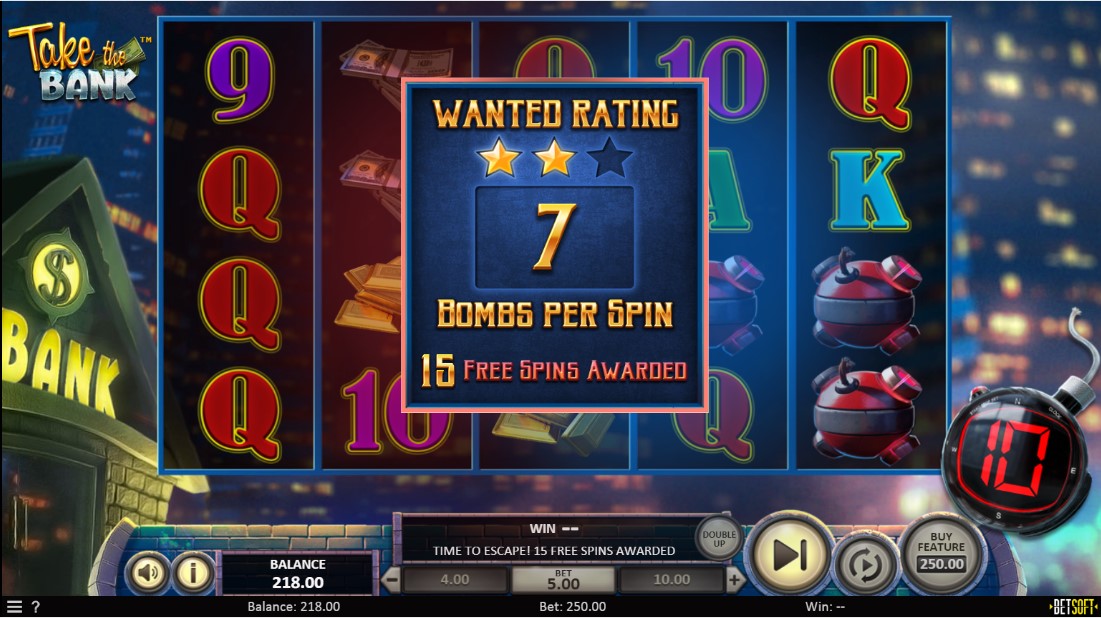 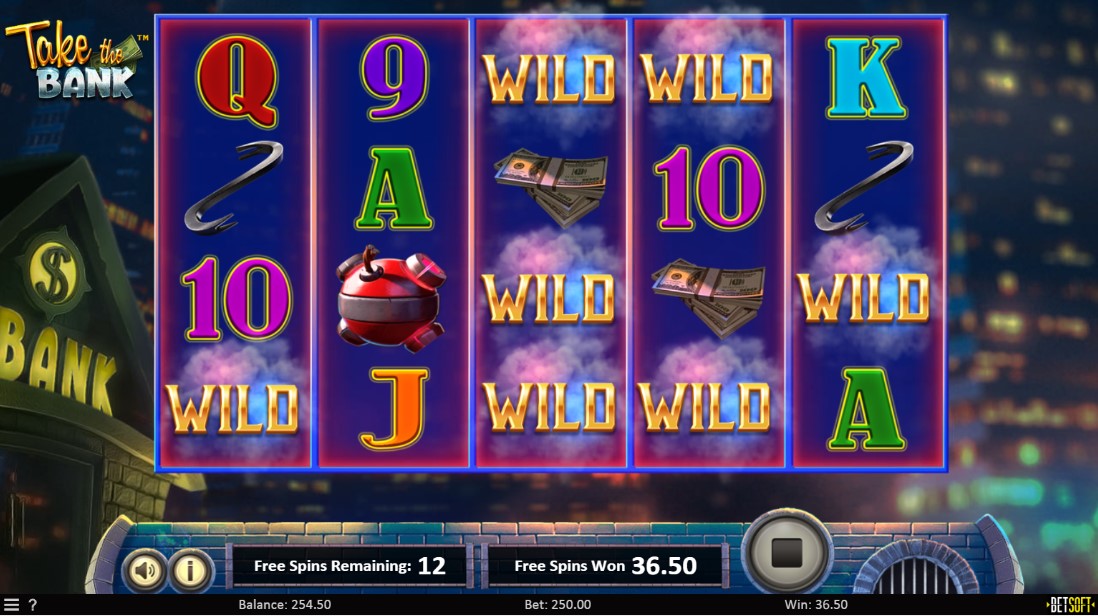 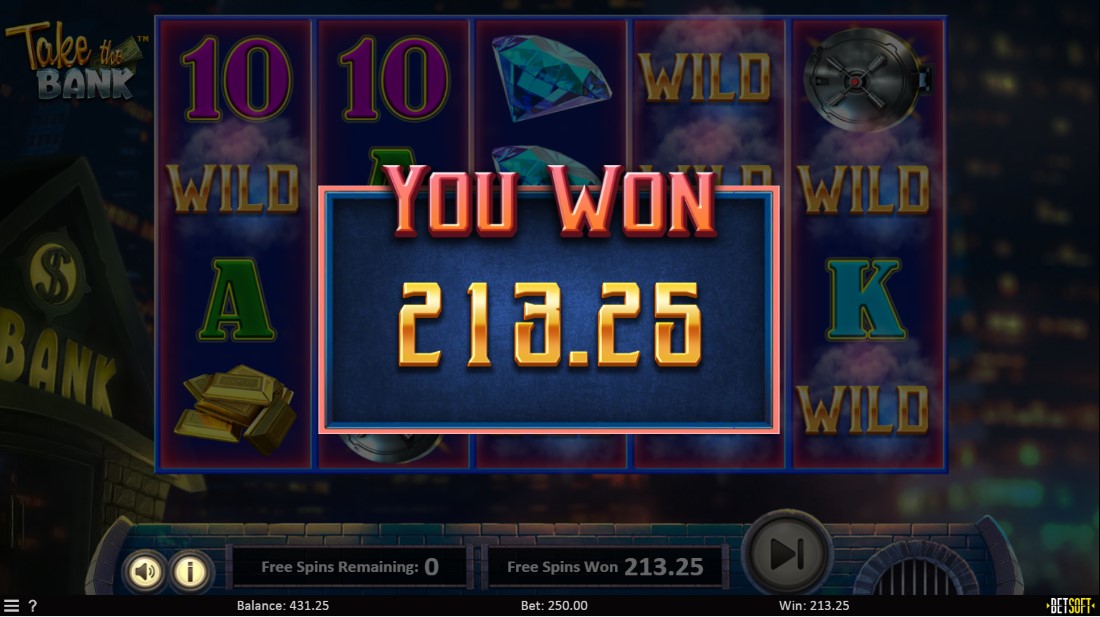 Write a Review for Take the Bank