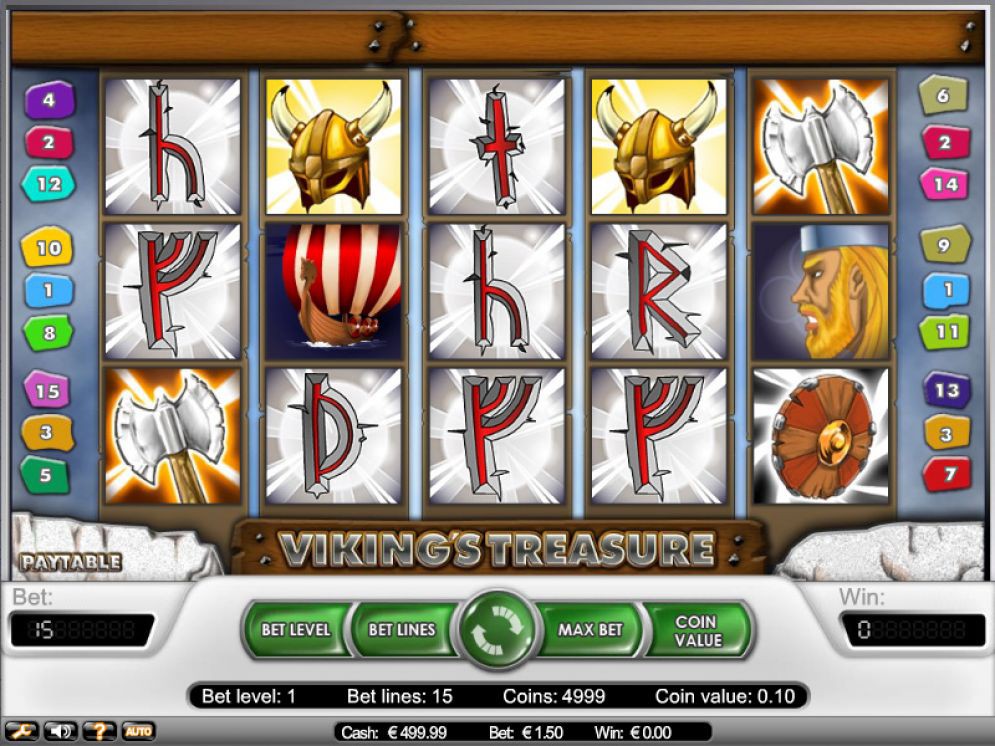 TOP online casino where you can play the Vikings Treasure

To be honest, the Vikings Treasure online slot machine does not leave an enthusiastic gaming experience. The gameplay is frankly boring, and the graphic design, although made with high quality, is not impressive. Playing Vikings Treasure slot machine using real money is generally not recommended. During testing, the slot did not show itself in any way on the good side, basically it only took, and if it did bring a win, it was incommensurably smaller in relation to the coins spent. Although the automaton has an average cycle length and average variance, in fact, this is not noticed at all. And the theoretical income of 95.9% does not allow you to get a positive mathematical expectation of a win. In general, it is best to get acquainted with this video slot in a free mode, after which you can safely forget about it, there is nothing extraordinary in it, and you can get big winnings with the help of this slot ... Well, I don’t know, this is more from the realm of fantasy.

Agree, it is quite difficult to imagine a real Scandinavian Viking who would be engaged in cattle breeding or plowing the land. Of course not, living in the extreme and very harsh climatic conditions of Scandinavia, the Vikings themselves became harsh and ruthless, without compassion and fear. The constant struggle for their own survival became the reason that the Vikings eventually became born travelers and warriors, they became ruthless conquerors, sowing terror on their enemies. If you are interested in the history and life of the ancient Scandinavian people, then you have a chance to get to know the brave sailors better. Just go to the online casino, there a real drakkar is already waiting for you, on which you will go on a journey to Ancient Scandinavia. Slot machine online Vikings Treasure is already waiting for you and is ready to generously reward the hero. For this, the developers made it possible to win the maximum win with just one spin in the amount of 40,000 coins, and in addition, the slot is configured to return rates of 95.9%.

As the main background, the developers decided to choose blue and blue shades, symbolizing the sea and the cold climate. However, there are also wooden elements here, because the drakkar was also made of wood, and the payline numbers do not fit the general theme at all, as they are very bright and colorful. The most impressive graphical feature is the game screen, which will spin the reels, as it is designed as a cold, ice field. At the very bottom of the screen, above the control panel, you can see huge blocks of ice that complement the overall picture, providing players with the opportunity to once again be convinced that these were harsh times, and the Vikings lived in a very cold land. As for the soundtrack, it competently complements the graphics and corresponds to the theme. You will hear both Scandinavian melodies and the exclamations of the Vikings who returned from the campaign with a drakkar full of gold.

It will not be difficult to figure out what and how with the interface and control panel, even for beginners, not to mention seasoned gamers. And all because the developers used the standard, now traditional control panel, without making any significant changes. Just like the vast majority of NetEnt emulators, the Vikings Treasure online slot machine is controlled using standard buttons on the control panel located at the bottom of the screen.

So, the journey begins with the choice of tracks in the fairy world, there are five of them and these are the reels of the slot. This is a very harsh region and it is simply necessary to know some rules. Well, as a rule, on these very reels there are paylines, the number of which is 15 and it is not fixed, i.e. the player can choose a suitable number of active lines by himself using the "bet line" button. The slot is launched using the button located in the very center of the panel, it is, as always, green and arrows are drawn on it. You also need to place bets, for this there are two buttons. The first is the "bet level", with its help the number of coins for each active line is regulated, at least one coin and a maximum of 5. And with the help of the button "get. Coins ”, you can set the optimal rate of the game currency, so the nominal value of one coin can vary from 2 cents to 50 cents.

These were the main keys, there are also auxiliary keys. For example, "max bet", with which you can start a spin at the maximum bets in one click. For those who are not used to changing the game parameters often, the automatic reel start mode is perfect, for this use the auto play key and select the number of automatic spins. During the game, winning combinations of symbols will often appear to view information about the cost of each such combination and not only click paytable.

Like many others, Vikings Treasure has an auxiliary control panel with which you can customize the graphics and sounds, it is located in the lower left corner of the screen.

It should be noted right away that the Vikings online slot Treasure is one of the most traditional. There are only free spins here. There is no game for doubling the win, but there is enough excitement even without it, there is no progressive jackpot either. Well, of course there are wild and scatter symbols.

Real Scandinavian runes are used as the youngest symbol in Vikings Treasure slot machine. Due to the fact that they are made in the form of red letters on a gray ice background, they stand out in the overall picture. Unfortunately, this is the only thing that makes them stand out, since they will not replenish the account much, only from five to 150 bets.

Thematic symbols will do much more. So, a Viking ax, a helmet with horns, a wooden shield, a Viking girl and an image of a drakkar cutting through the waves bring from 2 to a thousand credits for each delivered.

Two standard characters are used as special characters. Wild symbol is made in the form of a portrait of a Viking, who not only knows how to stand in place of any symbol in the game, except for the scatter, but also doubles the winnings with his participation. In addition, wild symbols can play with each other and create their own prize sequence, with a maximum winnings of 10,000 coins. And as a scatter, the image of a hand holding a handful of jewels is used. For three such scatter symbols, the player can get 15 reel spins, which, nevertheless, will take place with an additional x3 multiplier.

The Vikings Treasure online slot machine does not have any special bonus games, the progressive jackpot is not played either. There is only a free games mode, which provides a scatter symbol if three or more pieces appear anywhere on the playing field.

Write a Review for Vikings Treasure