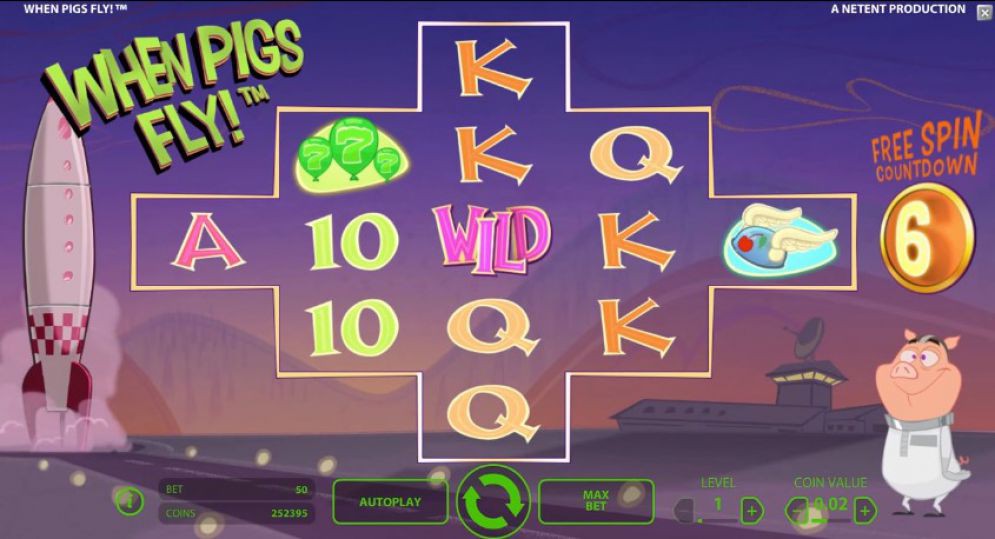 TOP online casino where you can play the When Pigs Fly

When Pigs Fly online slot machine strikes, first of all, with its novelty and uniqueness. We must pay tribute to the developers of NetEnt for the fact that almost all of their creations are high-quality and interesting software. In this case, they managed to pleasantly surprise even experienced players by providing a completely new concept of getting free spins, moreover, with an increase in the chances of a big win with each new re-spin. There are really a huge number of paylines in the game and it would seem to be difficult to play with such an abundance of paylines and winning combinations, but this is not at all the case, in fact, everything is simple and understandable even for beginners. For those who still find the slot difficult, there is a demo mode that allows you to play the When Pigs Fly slot for free and without registration . In addition, it is convenient to test the slot in the free mode in order to understand its mood. Of course, the slot will not give out the amount with six zeros, but at least the payments are quite solid, especially since 97% of the return on funds is a decent indicator. The variance is average, as is the cycle length, which once again suggests that the When Pigs Fly online slot is not the most greedy, but also not the highest paid.

We present to your attention another, I'm not afraid of the word, a masterpiece from the developers of Net Entertainment When Pigs Fly online slot machine . In fact, the developers decided to present their own vision of the famous catch phrase "when the pigs fly." The pigs will not just fly, but will go to plow space, for this the pink pigs even have a special spaceship in the form of an original playing field, you can see a slot. If you go on a space journey with brave pigs, you can earn the maximum winnings of 480 thousand coins, and this is just one spin.

At first glance, the When Pigs Fly online slot seems very simple, but this is only at first glance, because if you look closely, you realize that this video slot is unique in its characteristics and design. Take, for example, the graphic design. A real cosmodrome appears in front of you, made in blue and purple shades, around the gray silhouettes of buildings and, apparently, the launch of a spaceship is about to take place. But all this pales before the extraordinary shape of the playing field. The fact is that the reels here are not of an entirely ordinary shape and may contain a different number of symbols, for example, there may be at least one symbol and a maximum of five on the reel. But that's not all, the most interesting thing begins when a winning combination falls out, then the reels begin to transform, expanding in size. This process takes place under the vigilant supervision of the astronaut pig, who also presses the button to start the free spins countdown. As for the soundtrack, it is more like the sound effects of 8-bit game consoles about shooting games. Remember yourself in childhood, when every successful hit was accompanied by ringing sounds, grinding and your happy face from a successful shot. And this is just one of the reasons to try playing the When Pigs Fly slot for free and without registration to start, believe me, there are plenty of reasons to play for real money here.

What kind of spacecraft, and indeed a spaceship, without studying control, in our case, a control panel with buttons serves as a captain's bridge. Although the slot is unusual in its design, the control panel is preserved throughout its structure with slots traditional for Net Entertainment. Therefore, even beginners will find it easy to figure out the purpose of the buttons, and experienced players do not pay special attention to it at all, making manipulations with the settings in just a few seconds.

So, in order to start the reels in rotation, it is enough to press the button located in the very center, it is easy to recognize it, because it is a green circle with arrows. Next to it there is a button for desperate players, this is max bet, with its help the reels are launched with the maximum bet values. On the other side of the start button is the auto play button, by pressing which the players will launch the slot in automatic mode, all they need to do is select the required number of automatic spins.

Now with regard to the bets themselves, because the size of the win will depend on them. Level regulates the number of coins that will be wagered on each line, at least 1 coin can be bet, and a maximum of 10. An interesting thing is with the denomination of each coin, as you know, all video slots from Net Entertainment have the ability to adjust the rate of the game currency. In the When Pigs Fly slot machine, the rate varies from one to twenty cents. The small denomination of the coins is primarily due to the fact that during the game the reels of the slot will often expand and instead of 45 lines there may be as many as 3125 lines, which appear during the free spins mode. By the way, the coin rate is regulated by the coin value button.

Also in the lower left corner is an additional control panel where you can adjust sound and graphic parameters. The most interesting thing is that the game has free spins of the reels, but no scatter symbols that should trigger them. Free spins are launched according to a completely different principle, in fact, this is the main highlight of this slot. Otherwise, it is no different from a standard slot, there is a wild symbol and free games. The progressive jackpot is not played, there is no bonus game here, as well as the risk of playing to double the winnings. But he can boast of an excellent indicator of theoretical income, 97%.

As always, playing cards, starting with ten and ending with an ace, are symbols of the lowest, in other words, cheap category. For combinations with their participation, you will receive from 5 to 50 bets. The symbols of the senior category will bring much more, this is a winged helmet, balloons with the image of sevens, an airship with the inscription BAR, a pig in a helmet and a pig in a spacesuit, for which you will receive a minimum of 10 and a maximum of 500 coins. The most expensive symbol in the game is the logo with the name of the game When Pigs Fly, which can be rewarded with a maximum of 1000 coins.

But as far as the wild symbol is concerned, the developers' imagination on it has apparently been exhausted, because it is just the inscription wild. It appears on all reels except the extreme left and can replace absolutely any symbol in the game.

To start free spins of the reels, the developers decided to simplify everything altogether, if in other slot machines the scatter symbol is most often used for this, then the online slot machine When Pigs Fly simply does not have it at all. Everything here is extremely simple and clear, you don't need to catch the scatter symbols, it is enough for one, maybe the most inexpensive, prize sequence of symbols to form and the player gets one free spin. If the free spin brings a winning combination again, another additional free spin is credited and so on five times in a row. But that's not all, with each new re-spin, the reels expand, and at the same time the number of paylines increases, respectively, the chances of getting as many coins as possible grow exponentially.

Write a Review for When Pigs Fly